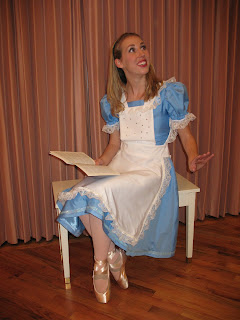 The spring gala season for the A.V.A. Ballet Theatre opens with the classic ballet Alice in Wonderland on March 21st and 22nd, 2009 at the Pioneer Center for the Performing Arts. The Reno Philharmonic Orchestra will perform the magnificent score to this wonderful ballet. Re-staged and re-choreographed by Alexander Van Alstyne, Alice in Wonderland is the captivating story of Alice’s adventures through the looking glass. The White Rabbit, Mad Hatter and the Queen of Hearts have starring roles in this fantasy adventure. This classic story is filled with mesmerizing dance, intrigue, comedy and is fun for the entire family.

A.V.A. Ballet Theatre’s Eve Allen will star as Alice. Kate Crews and Jason Linsley from Ballet West will also perform as the Queen of Hearts and the White Rabbit. The large cast includes many talented dancers from numerous different ballet studios in the Reno area.

The Saturday March 21st performance will be held at 8pm and the Sunday March 22nd performance will be at 2pm. Ticket prices for adults are from $25 to $40. Ticket prices for children 12 and under and seniors 65 and older are from $15 to $35. For tickets call the Pioneer Center at 877-840-0457 or on-line at pioneercenter.com. Box office hours are Monday through Friday 11am to 6pm.

A.V.A. Ballet Theatre is the resident ballet company of the Pioneer Center for the Performing Arts. They are northern Nevada's largest company under the instruction of a professional faculty with years of performing experience in renowned metropolitan ballet and production companies across the United States and Europe.

The time for dancing snowflakes and sugarplums has arrived. Just when the season to be jolly turns into the season to be Scrooge (“No! Not another “Nutcracker!”), the A.V.A Ballet Theatre and the Reno Philharmonic produce a “Nutcracker” to cherish. In a once-upon-a-time interview Dick Cavett asked an irascible Agnes DeMille, choreographer for the hit musical “Oklahoma,” why “Oklahoma” was a success? “Because it was good!” she replied with a sense of exasperation. “It was good!” “Because it is good” is what makes the A.V.A. Ballet Theatre’s “Nutcracker” a success. Choreographer Alexander Van Alstyne is the power and the muse behind his company’s presentation that just gets better each year. Co-director Miriam Allen is the power that helps make it all happen. Fine dancing from principals, lovely execution from a young and gifted corps de ballet, elegant costumes, beautifully decorated sets, translucent lighting, and a wonderfully groomed orchestra conducted by someone who stays glued to dancers, and – presto – audiences are blessed with a sumptuous production. Nevada Opera’s artistic director, Michael Borowitz, conducted the A.V.A.’s “Nutcracker” for the first time and his is the orchestral honing – a rich sound - and the theatrical timing that places this production another notch higher in the company’s march toward prominence. With the exception of the metallic sounding celeste (electronic Sugarplum music, no doubt) the A.V.A Ballet Orchestra, made up of members of the Reno Philharmonic, was in top shape. Live music places the production well above any of the other “Nutcrackers” in Northern Nevada this season. Imported principals are a nicely matched set. Tall, slender, long-legged, and physically appealing, they are the best collection of imports in memory a Reno “Nutcracker” has had. Far from the illusion of her icy surroundings, Mayo Sugano is a poised and elegant Snow Queen of warmth. Rory Hohenstein is a high-minded, noble Snow King and a cleverly charismatic Chinese soloist. Hohenstein is currently dancing with the new and prestigious Christopher Wheeldon company. Elegant, assured and with a dance-diva persona Alicia Fabry is a dazzling Sugar Plumb Fairy. Adam Schiffer is her cavalier and he’s stylish and heroic. Fabry and Schiffer have chemistry, which is a big assist in the potency of any Sugarplum Pas de Deux. In a return engagement as Herr Dosselmeyer, William Pizzuto’s casting as the kindly wizard of magic continues to be on the sunny side of near perfect. Seventeen-year-old Ryan Sargent is a handsome Nutcracker Prince, a fine upcoming dancer, and an especially appealing consort for lovely fourteen-year-old Eri Nishihara. Nashihara is an enchanting Clara and an elegant young dancer with considerable promise. The Act II vignettes are without exception stunningly brought off. Eve Allen, the cast’s multiple threat (a compliment) who appears in as many roles as quick costume changes allow, shines as the sultry and serene Arabian Coffee. Coming in second in the quick-change department, but holding her own nicely in the dance department is Maegan Price (Maid and Magical White Soldier). The virility of Russian dance is managed with daring athleticism by Michael Heredia and Bret Stancil. Mother Ginger (Kathleen Bolotin) and her eight darling Ginger Girls just have to bring joy to even the most joyless. The Merlitons and the Chinese bring impeccability and color to a holiday treat that never retreats. The lovely flowers that waltz and the luminous snowflakes that float gently through space are the ballet’s luminous moments for “Nutcracker’s” corps de ballet. Precise without being pedantic the A.V.A.’s corps de ballet is alive and very well, indeed. The multitudes of mice, soldiers, pages, party girls, family and friends that adorn “Nutcrackers” from coast to coast and from country to country are here in plentitude and are as cute and disciplined as they can be. But beyond cute and disciplined, it’s passion for the art of ballet that’s driving the A.V.A. Ballet Theatre’s transcendent version of Tchaikovsky’s immortal “The Nutcracker Ballet.” Much like Dorothy Gale clicking the heels of her ruby slippers and saying “There’s no place like home,” it’s terrific to have a version of “The Nutcracker” that thrills right here in our own backyard. The A.V.A. Ballet Theatre and the Reno Philharmonic’s “The Nutcracker Ballet” can be seen at the Pioneer Center for the Performing Arts, 100 South Virginia Street, Reno, Nevada, December 12 (the performance reviewed) and 13 (2008) at 8 p.m. and December 14 at 2 p.m. For information call 775-686-6600.
Posted by Duckingham at 1:52 PM No comments: