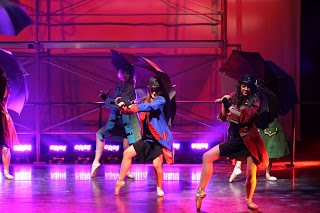 The Hawkins Amphitheater at Bartley Ranch will come alive with ballet grace and passionate rock, dance, Broadway and alternative music as A.V.A. Ballet Theatre presents the rock ballet Vortex July 10th and 11th as part of the Artown celebration.

Artistic director Alexander Van Alstyne has choreographed an exciting contemporary ballet that will be like no other you have ever seen. Imagine ballerinas performing grande jetés to music by popular rock artists. The stage will feature scaffolding and exciting props and sets that will create a visual spectacle that can not be missed.

Featuring a cast of extremely talented performers from Reno and starring guest artists from Ballet West, the rock ballet Vortex will feature demanding and passionate movement inspired by the dynamic of the music.

The performances of Vortex are at 8:30pm July 10th and 11th at the beautiful Bartley Ranch Hawkins Amphitheater. Ticket prices are $15 for adults. Students with I.D. only $10. This is a PG 13 show. Special VIP tickets that include wine and hors d’oevres are available for $40. The gates open at 7:30pm for picnicking and the VIP party. Tickets can be purchased online at avaballet.com, by calling 775-762-5165 or at the Bartley Ranch box office the nights of the shows.

A.V.A. Ballet Theatre is the resident ballet company for the Pioneer Center for the Performing Arts. They are northern Nevada's largest company under the instruction of a professional faculty with years of performing experience in renowned metropolitan ballet and production companies across the United States and Europe.

Vortex is a part of the Artown festival July 1 – 31, 2009. The month long summer arts festival features more than 300 events produced by more than 80 cultural organizations city wide with major funding provided by the City of Reno.

Mark you calendars now for this spectacular production. For more information call A.V.A. Ballet Theatre at 775-762-5165.

A.V.A. Ballet Theatre will be holding its annual summer dance camp June 15–June 26, 2009. This dance camp is designed for students age 8 years of age and older who have had previous ballet training. The dance camp includes instruction in ballet, jazz, and pointe variations.Classes are held Monday through Friday at the Conservatory of Movement, 73 West Plumb Lane, Reno, Nevada. The morning session is for students 8-9 years of age and includes ballet technique and jazz. Students ages 11 to 12 will learn ballet technique, jazz and choreography. The afternoon session is for advanced students and includes ballet technique, pointe/variations, and jazz. The dance camp includes guest instructors from Utah’s Ballet West.“Our summer camp provides an intense level of training,” says A.V.A Ballet Theatre artistic director Alexander Van Alstyne. “For those students who want to greatly improve their dance skills this summer camp will provide the instruction and technical expertise that they are seeking.”For more information on the A.V.A. Ballet Theatre summer camp call 775-762-5165.A.V.A. Ballet Theatre is the resident ballet company for the Pioneer Center for the Performing Arts. They are Northern Nevada’s largest company under the instruction of a professional faculty with years of experience in renowned metropolitan ballet and production companies across the United States and Europe.

The A.V.A. Ballet Theatre’s presentation, in collaboration with the Reno Philharmonic, of “Alice in Wonderland” is as bright and sunny as a van Gogh painting. Lewis Carroll’s classic tale, “The Adventures of Alice in Wonderland,” was published in 1865. Given the joyous dance presentation that opened last night at Reno’s Pioneer Center (3/21/09), Alice will remain forever young. With gorgeous costumes designed by AVABT’s Alexander Van Alstyne, and marvelously creative choreography by the same Mr. Van Alstyne, it’s clear the company’s impresario is a jack-of-all-trades who, like the Mad Hatter, wears all kinds of hats with roguish elegance. The production’s able assistant is Miriam Allen, a gifted dance director of note in her own right. “Alice” comes with glowing Don Smith lighting, handsome sets and set decorations, and an elegant score by Joseph Horovitz played by members of the Reno Philharmonic with the same care as if they were playing Mozart. The orchestra is conducted with dash, and sensitivity to the needs of dancers, by Nevada Opera’s Michael Borowitz. The Horovitz is a rarely heard score that comes by its droll wit with a well-grounded history for musical whimsy. Horovitz provided choice musical sketches for the hilarious Hoffnung’s Music Festival concerts and recordings popular in the late 1950s and early 1960s. Hoffnung, a tuba player, loved thumbing his nose at upper-crust customs in music that were considered “erudite” and “superior.” Two of Horovitz’s contributions to Hoffnung’s concerts stand out: “Horrortorio” and “Metamorphosis on a Bedtime Theme.” Each gives insight into what Horovitz is up to as he breathes renewed life into the whimsical characters that have made their way from Carroll’s original “Alice” to this highly imaginative presentation. From the Caterpillar, played with seductive grace by Nicole Shutt, to the Duchess’s mansion inhabited by the comedic Duchess of Doreen Begley’s creation and the Duchess’s pepper-fetish cook (Kathleen Bolotin), “Alice in Wonderland” never once loses its momentum to entertain. Eve Allen is Alice and she evokes the mix of youth, innocence and curiosity that has made Alice the endearing personality she is for over a century. Allen is given a great deal to do and she does it with the assurance of a beautifully groomed ballerina. The Rose Garden, ruled with cold disdain by Katherine McCall as the haughty Queen of Hearts, also commands attention. As does the always-late White Rabbit who is danced with intelligence and energy by Aidan DeYoung. Beau Pearson dances the Knave of Hearts with authority and panache. Emily Adams is an exquisite Tiger Lily. Adams and Pearson are a captivating couple and dance the production’s understated, yet rapturous pas de deux with no hint of affectation. They are simply who they are – young lovers in Wonderland. Each of the animals has its own vocabulary that charms. The Cheshire Cat (Michael Heredia), Dinah (Brylee Garcia), The Dormouse (Kelly Rubero) all charm, as do Bruce Lundstrom’s Mad Hatter and Colton Harrah’s March Hare. Also bringing pleasure is the duet of Tweedledee (Becca Kitchen) and Tweedledum (Jessica Evans), and the giddy, animated quadrille of lobsters which just have to please even the most dour. Not to be forgotten is the corps de ballet which shines it on as Act I’s Living Flowers and as Act II’s bouquets of Roses. With arm movements as precise as a Bach fugue and legs as nimble as prodigy’s fingers, these young dancers are a beautifully turned out matched set. This impressive “Alice in Wonderland” is a feast of color and dance with a multitude of delectable delights. What's not to love about a land of wonder filled with adorable rabbits, butterflies, lady bugs, gardners and cards that move? The end result is simply to enjoy. The AVA Ballet Theatre and the Reno Philharmonic’s “Alice in Wonderland” can be seen at the Pioneer Center for the Performing Arts, 100 South Virginia Street, Reno, Nevada, Saturday, March 21 (2009) at 8 p.m. (the performance reviewed) and Sunday, March 22 (2009) at 2 p.m. For information call 775-686-6600.
Posted by Duckingham at 11:32 AM No comments: